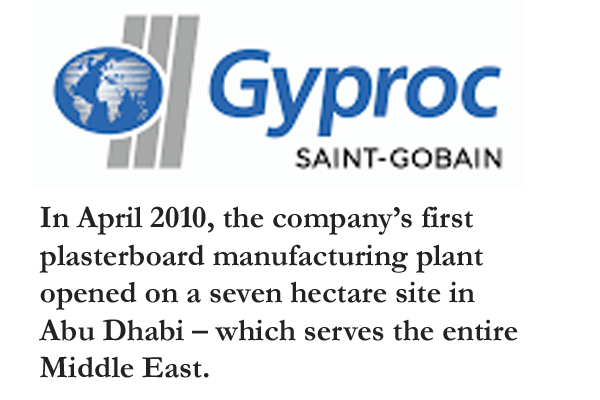 Saint-Gobain, with it’s headquarters in Paris, today operates in more than 64 countries. In the Middle East it began trading as Gyproc in 2005. In April 2010, the company’s first plasterboard manufacturing plant opened on a seven hectare site in Abu Dhabi – which serves the entire Middle East. The products being offered in the Middle East include Gyproc plasterboards, Gypframe metal components, Gyproc Accessories and Gyproc GypFine Plasters. All Gyproc products comply with international standards such as BS, ASTM and EN and with Civil Defence and Municipality approval across the region. Gyproc products have been used on some of the largest projects in the region, including the stations and main depot for Dubai Metro; Atlantis Hotel – Palm Jumeirah, Capital Gate – Abu Dhabi, Ferrari Experience – Abu Dhabi and Masdar Institute – Abu Dhabi.